I loaded version 2020.2.2 back in February. I’m now being asked to upgrade 2020.2.12 which seems a retrograde in numbers. However I started the upgrade and halfway through it prompted to install a driver from a third party for which I had little information so I aborted. Raidrive stopped working and I tried to install “old” version being prompted that a newer version was loaded. I uninstalled “new” version again but still “old” version would not load. 2 hours of cleaning program files, registry etc and finally got old version to load again which works perfectly for WebDAV access.

What is the driver trying to load in new version? 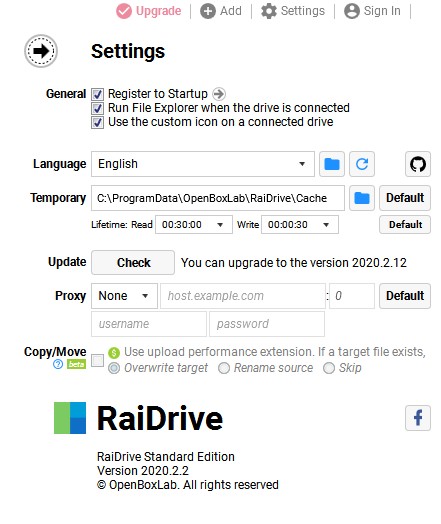 Thanks a lot for your detailed report.

That is a commercial device drive offered by “EldoS” for RaiDrive and it has been used since the first version of RaiDrive.

RaiDrive had an issue of “Google Sharing issue”. To fix this RaiDrive 2020.2.12 changes the device driver option and it need for the user to confirm like the following dialog.

I’m now being asked to upgrade 2020.2.12 which seems a retrograde in numbers.